The Story of Eddie 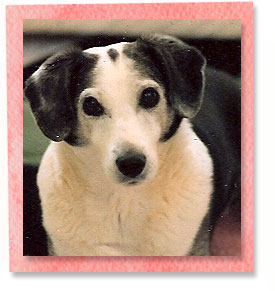 This page is dedicated to the memory of Eddie—the happiest, wisest, and most loving creature to have ever touched my life. While snowmobiling with my friend Marilyn, we noticed a small black- and-white dog limping along the side of an icy snow bank. He looked like a silly combination of Snoopy and the RCA Victor dog. But he was in bad shape: malnourished, frostbitten paws, and the look of suffering was evident in his eyes.

I took him home, named him Eddie, and he immediately entered a part of my heart that I never knew existed. There was a connection between Eddie and me that defied explanation, which is saying a lot considering I’ve always loved animals and have been involved in their rescue for many years.

Eddie was infused with a pure essence of love and joy, as most dogs are, yet something about him was different. He not only became my best friend, which would have been more than enough, but over time Eddie became my teacher. He began each morning with wide-eyed wonder, tail thumping and kisses. Then we’d go outside where Eddie would run in a big circle as fast as his legs would go, and then he’d stop, lift his snout and sniff the air. There was no mistaking the gratefulness he felt for his life. Oftentimes I imagined him thinking: Ah, lucky me—one more day to love and be loved, one more day to run and play and eat and nap in a warm pool of sunlight … life is good.

Throughout our earthly journey together, Eddie and I were inseparable. When he passed over to the Rainbow Bridge, I thought I’d never survive it. But over time I’ve come to believe we’ll be together again. I imagine him waiting for me with a tennis ball in his mouth, his tail wagging and his eyes bright with wonder … and gratefulness.

People often ask how many animals I’ve rescued over the years, and truthfully, I’ve lost count. Many I was able to keep, others I found loving homes for, and some were in such bad shape that they didn’t survive. But it would be misleading to say that I rescued Eddie … for all along it was Eddie who rescued me.

Please consider enriching your life by giving an abandoned/abused furbaby a loving and safe home. And if you can, please help support the organizations that are dedicated to this worthy cause. A few that I support are: