Lately I’ve received numerous requests from readers and book clubs for more detailed information about me. Time doesn’t permit me to answer these requests individually, so I’ve put together a few paragraphs about my life  … 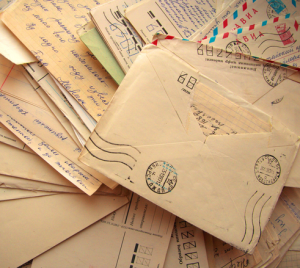 I was born on an elevator during a snowstorm, a story my father enjoyed telling whenever the opportunity arose. For the first five years of my life, I lived (along with my mom, dad, and older brother) on my grandparents’ farm. It was a rural area, and other than a few tolerant garden toads and a highly social chicken there wasn’t anyone to play with, so I created imaginary friends. I drew pictures of them and built them homes out of shoeboxes—furnished by pictures I’d cut from a Sears & Roebuck catalog. Eventually I wrote stories about my shoebox friends, giving them interesting names and complex lives.

From earliest memory, there were two things I loved above all else: writing and painting. I wrote my first short story when I was eleven and sold my first painting at the age of fourteen. I believed the sale of the painting was a sign of what direction I should take in life, so I chose to study art. I built a career in fine art, painting in the mediums of watercolor and oils, and that career soon segued into interior design. But I still kept writing short stories and dreaming of becoming a novelist. Life sent me on many creative journeys and I ultimately became the president and co-owner of an interior design studio.

Years went by, long hours and hard work brought success, and with it came the inevitable stress of business ownership. During the busiest year of my professional life, I nearly died from the same infection that took puppeteer Jim Henson’s life—group A streptococcal infection that resulted in septic shock. After finally being discharged from the hospital, I returned home to convalesce. I spent weeks reevaluating my life, and as I struggled to regain my health, my dream of writing a novel resurfaced. Yet no matter how I looked at it, there simply weren’t enough hours in the day to fulfill the demands of my career and write a novel. So I let the dream go.

But I yearned to write so badly that I began crafting newspaper and magazine story ads for the furniture in my shop: stories of who owned the pieces, who stole them, and who fought for them in divorce. The story ads were a hit, and I loved creating them, but it wasn’t the same as giving my all to a full-length novel.

One snowy January morning, a stranger called my design studio and inquired about the story ads I wrote. He said he and his wife loved them so much they cut them from the newspaper and taped them to their refrigerator. He wondered if I’d ever considered writing a book. Like an unexpected gust of fresh air, his words blew the door wide open. Right then I knew if I were to write a novel, it had to be now or never. I chose now.

Within three months I sold my portion of the design business, kicked off my high-heels, and began to write. Day after day my fingers blazed over the keyboard. I typed “The End” of Saving CeeCee Honeycutt nearly four years later. To my surprise and delight, the book went on to be a New York Times and international bestseller. Three years later Looking for Me launched and it also became a New York Times bestseller and won the 2014 OHIOANA BOOK AWARD for BEST FICTION. Rights have sold to twelve foreign countries.

If there’s a moral to my story it’s this: take a chance, embrace your dreams, forgive, let go, and move on.

Oh, and there’s one more thing: be mindful of the words of strangers.